Dreaming of going around the world. Till then, coding. 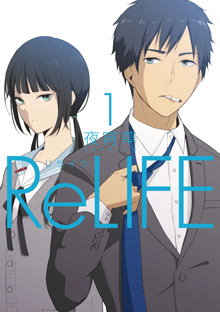 After reading around 10 chapters, the manga felt like a refreshing break. It’s a story about a 27-year old NEET named Arata Kaizaki, who is presented a chance to experience an all expenses covered life as a 17 year old high-school student for a full year by a person named Ryo Yoake, a guy who works in the support division of a company called ReLIFE. The terms are simple: If his experience is deemed successful by the company and he is able to meaningfully change as a person, he’ll be offered an employment opportunity to restart his career.

ReLIFE is one of the few slice-of-life stories I’ve read that has brought me both immense joy and sometimes, a lot of tears. Overall its quite a wholesome story, with a wonderful character development. Extra points for making the manga in color and having Kawaii aesthetics all over it. And for those amazing crayon sketches at the end of every report. The author’s intentions reflect well from the very beginning, and while the plot isn’t one that will keep you awake or throw in any hard twists, I must admit I was quite pleasantly surprised once or twice. The ending was super-amazing, though it has a certain plot-armor to it, as it feels something you would expect, but even more, you, the reader wants it to end that way.

Honestly, I’ve read and watched both, though if you want to take a quick dive, I’d suggest the following order:

I’m done. What next?

You May Also Enjoy

At last, India gets an Apple Store

On September 18, Tim Cook announced the launching of Apple’s online store in India and as per Apple, we can expect their full range of products and suppor...

In the many years of using computers and different operating systems, I can say, without a doubt, that any user-facing program that is meant to download f...

So, WWDC brought along loads of announcements from Apple about different devices I use. And here’s my 2 cents for the iPad and the Mac. The iPad So, ...

Some blog optimizations I’ve been experimenting with, my experience and any pitfalls someone might encounter in similar situations.